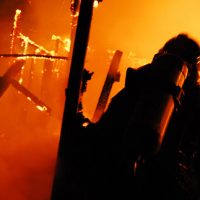 Building fires are less common today than they once were. Better building codes, higher quality building materials, and state-of-the-art firefighting equipment and techniques have all worked to really limit the amount of lost life and property damage from the days of old. The National Fire Protection Association offers a brief history of fires and fire prevention improvements over the last century.

Unfortunately, serious building fires still happen. Sometimes, it’s a cigarette left burning. Sometimes, it’s a candle or a kid playing with matches. But in many instances, building owners and condo managers make careless renovations, use unlicensed contractors to make repairs, and even use inadequate materials in maintaining the property. When this happens, deadly fires can happen at any time.

In December, the Tampa Fire Department responded to a fire call at an apartment community. According to news reports from Channel 10 News, the blaze ended up causing $400,000 in property damage, but no one was seriously injured. Investigators determined that an “electrical malfunction” caused the fire to start on a back porch.

Just a month after the electrical fire, another massive blaze took hold of a local condo, leaving a number of families with nowhere to live. Fox 13 reports that the cause is still unknown, but witnesses suggested a candle may have been to blame.

A lot of things can cause building fires, and nothing is more important than human life. People often make the mistake of going back into a burning building in a last-ditch effort to save some treasured item, only to get trapped and die from smoke inhalation. Some of the most common reasons for buildings fires are:

While fireplaces and burning leaves may not be as common in Florida’s climate, the rest are pretty common. Every year, at least a handful of fires are started by people negligently using fireworks, especially during dry times or droughts.

The law says that we are all responsible for the damage we cause. It’s a pretty simple concept, but sadly a lot of people don’t really understand that. If someone has an outdoor fire pit, and ash and embers from the fire float onto a neighbor’s roof, causing a house to burn, the neighbor who caused the house fire is responsible.

If a condo or apartment management company hires a poorly trained contractor or unlicensed electrician who uses incorrect conduit or overloads a circuit, thereby causing the building to burn down, the management company and contractor who performed the negligent maintenance may be held responsible for all of the losses, whether they be property damages or physical injuries, even death.

How to Get an Insurance Company to Pay

While it would be great if insurance companies paid claims as they agreed to do in their policy contracts, it is quite common for insurance companies to look for loopholes or legal technicalities in the contract (insurance policy) that might allow them to avoid paying for your losses and injuries. In the law, this is sometimes called ‘bad faith.’