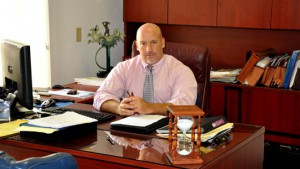 Thomas A. Roman, Esq. received a Bachelor of Arts degree in Political Science from the University of Florida in 1978. He then graduated from Stetson University College of Law in 1981. He is a Member of The Florida Bar, Member and past Committee Chairman of The Real Property Law Committee of The Clearwater Bar Association, past Chairman of The Business Education Committee of the Dunedin Chamber of Commerce, and a Member of The Florida Justice Association. Tom is also admitted to practice before the United States District Court for the Middle District of Florida.

Tom has lectured in person and been interviewed on television and the Tom Mitchell radio show, station 1340 AM, on various legal topics as a service to the public. Tom is a Member of the Kiwanis Club of Dunedin. He is married, has two daughters and a son, and enjoys water sports, snowboarding, and weight lifting. He is the 2007 Florida State Champion Strongman, Master’s Class, and is a national and world-ranked power lifter.