While many states have decided to legalize marijuana use, as of the date of this post, marijuana is still illegal in Florida for both medicinal and recreational purposes. Marijuana is a schedule one substance in Florida along with heroin and LSD as Florida has some of the harshest marijuana laws in the country.

Possession and Sale of Marijuana

The penalties for being caught with marijuana in Florida are primarily based upon the amount possessed and whether there was intent to sell, and are detailed in the chart below: 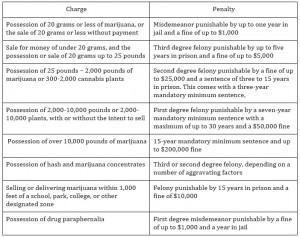 Upcoming Changes to Laws in Tampa

If you are convicted of possession of marijuana of any amount in Florida, you are at risk of losing your driver’s license for up to one year.

Possible Effect on Your Driver’s License

Finally, all residents of Tampa should be aware of an upcoming change to laws regarding marijuana within the city limits. Specifically, according to an April 2016 report from Channel 8 New, as of April 1st, 2016, Tampa residents caught with 20 grams or less of marijuana will face only a citation, as opposed to a misdemeanor. The citation will come with a fine, starting at $75, which will increase with any subsequent offenses. This decriminalization of marijuana possession in the city removes some of the extremely harsh penalties associated with the substance, and replaces them with more manageable fines without the detrimental effects of a lasting criminal record.

Marijuana is not legal in Florida for any purpose and can lead to a criminal charges. It is important to have an experienced criminal attorney on your side to help minimize the consequences of these charges. The knowledgeable Clearwater criminal law attorneys at Roman & Roman P.A. can help you if you are facing drug charges.