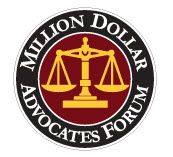 Michael Lentini was recently selected to become a member of the Million Dollar Advocates Forum. The Million Dollar Advocates Forum is one of the most prestigious groups of trial lawyers in the United States.  Membership is limited to attorneys who have won million and multi-million dollar verdicts and settlements. There are over 4000 members throughout the country.  Fewer than 1% of U.S. lawyers are members.  Michael now joins another member of the Roman & Roman firm, Paula Roman, in this respected organization.